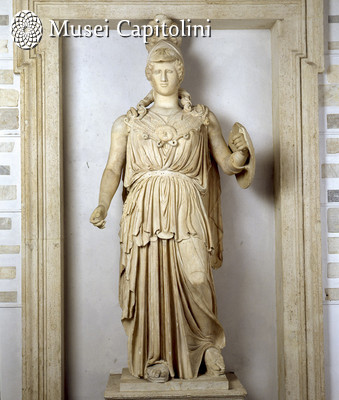 The goddess is armed with shield (she originally held a spear in her right hand) and is wearing the snake-trimmed Aegis adorned with the monstrous head of the Medusa. The deity is dressed in a long robe (peplos), girded immediately below the breasts by a band that originally was in metal.
The face has empty eye sockets, originally filled with hard stones and metal.
The size suggests it was probably the cult statue of a late Roman Republican temple consecrated to the goddess.

The sculpture has been variously interpreted: as a copy of the famous gold and ivory statue (Chryselephantine) of Athena Parthenos that Phidias made in the mid-5th century BC for the Athenian Temple dedicated to such goddess; or as an original work either by Euphranor or by Pasiteles. In the first case it could be identified with the Minerva Catularia, the statue brought to Rome from Greece and dedicated in the Capitolium by Quintus Lutatius Catulus. If the identification with a work by Pasiteles is correct, the possible provenience of the statue is the Campus Martius, where a delubrum Minervae was erected by Pompeius to celebrate his triumph in 61 BC.

It has been differently dated, from 4th to mid-1st century BC.