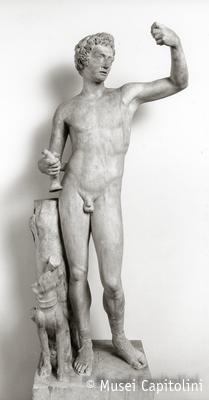 The statue depicts a young man, completely nude except for sandals, next to whom, on the right, is a dog.

The ideal facial features suggest that it is a depiction of a god (Endymion) or a hero.

The sculpture has been traditionally dated between the late Republican and early Imperial period (50 BC-50 AD).

This could be the same statue seen by Aldrovandi in the courtyard of the Palazzo de’ Conservatori in 1550, and described as “ Apollo with a dog at his feet”.
If this interpretation is correct, it is possible to trace its previous location: the Garden of the “Casa della statua”, at the bottom of the Capitoline Hill, near the church of Sant’Andrea delle Botteghe Oscure, which was subsequently replaced by the Chiesa professa del Gesù.

In fact, it probably belonged to the de’ Rossi collection, founded prior to 1454 and dispersed in 1517.
The inventory drawn up in 1517, after Gabriele de’ Rossi’s death, describes a statue entirely pertinent to the one in question.