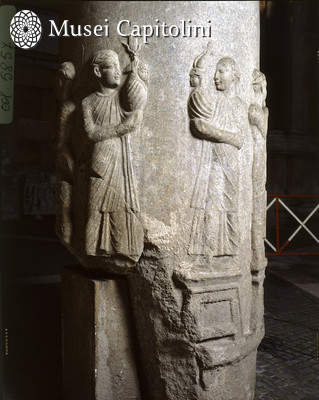 The Egyptian-type column, narrowing towards the bottom, is in granite from Elba; originally it was associated with a capital and a base in white marble worked separately. The frieze is carved around the shaft immediately above a listel.

Depicted are four pairs of priests or cult attendants facing each other and standing on high stools; their heads are shaved and wreathed with laurel leaves. All the figures wear Egyptian-style sandals; the canopic jar bearers are clad in long, high-necked tunics, while the other attendants have the upper part of their bodies uncovered.