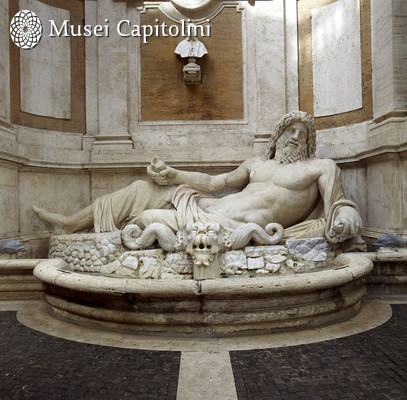 The statue known as Marforio is one of the six “talking statues” of Rome, along with the Pasquino, Abbot Luigi, Babuino, Madama Lucrezia and the so-called Facchino: the sculptures were sometimes used to post anonymous satiric verses (“pasquinate”) which were addressed to important personages as expression of the people’s discontent towards the ruling classes.

The statue is known since the 12th century and its identification has always been a matter of conjecture. At first it had been interpreted as the personification of the Tiber, then as Mars or as the image of the rivers Nile or Rhine. In 1594 the statue was restored with the attributes of Ocean (marine snake, shell and dolphins); the rather good-tempered facial expression, however, is little suited to the image of Ocean and appears to be more appropriate to a personification of the Tiber. The wolf and the twins Romulus and Remus were perhaps carved on the plinth.

The Marforio can be dated to the Domitian age since it is during this period that personifications became particularly popular in Roman art.

In the 16th century, the statue was located near the church of San Pietro in Carcere, in front of the church of S. Martina. In 1588 the Marforio was moved to Piazza San Marco; on this occasion they found a fountain basin in granite, certainly once associated with the statue, which was moved to Campo Vaccino. A few years later, in 1592, the Marforio was placed in the Capitol square where it was used to decorate a fountain designed by Giacomo della Porta. The Marforio was temporarily relocated in 1645 on the occasion of the building of the Palazzo Nuovo; in 1734, under Clemens XII, the sculpture was finally displayed within a niche included in the courtyard of the Palazzo Nuovo.

The origin of the name Marforio is perhaps to be interpreted as a contraction of Martis forum, a toponym which alludes to the original location of the statue; another possibility is that the name is the corruption of a Latin inscription once carved on the fountain basin in granite which was found in San Pietro in Carcere in 1588 (Mare in foro or Mart. in foro).