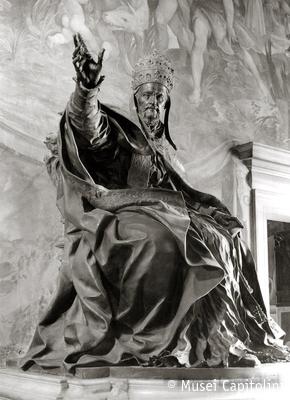 In March 1645, in view of the Holy Year celebrations, the Secret Council and Public Council of the Conservators deliberated to erect a bronze honorary statue to the reigning Pope, Innocent X Pamphilj (1644-1655). Its designated location was Palazzo Nuovo, a building that was being completed upon the wishes of the same Pope in Piazza del Campidoglio, across from the 16th century Palazzo dei Conservatori.

The statue was completed in 1650 and placed in the great Hall of the Palazzo dei Conservatori. Later on, prior to 1671, the bronze was placed in its final location in the main Hall of the recently finished Palazzo Nuovo. Having been miraculously saved from the ravages during the French occupation at the end of the 18th century, the bronze was transferred in 1818 to the Hall of the Horatii and Curiatii upon the wishes of Pius VII. It was placed on its original pedestal, on the short wall in the back of the Hall, between the two doors.

The casting has several imperfections, some gaps for casting problems and limited cold finishing of the surfaces. The latter, rather than being a defect, gives the bronze an extraordinary strength. Even if it was not the sculptor’s intention, the non-finished effect enhances the extremely high quality of the work, considered by critics as one of Alessandro Algardi’s masterpieces.

Initially, the commission to create a statue in honor of Innocent X was assigned to Francesco Mochi, a master bronze caster and very famous sculptor who was paid 400 scudi in advance by the depositary of the Capitoline Chamber in early February 1646.
However the commission fell through and on 13 March 1646, the bronze was commissioned from the Bolognese sculptor Alessandro Algardi, who was already working in Rome in that period. On 13 January, Algardi received the first down payment of 500 scudi against the entire amount of 2500 scudi allocated for the statue.

The first casting of the work, most likely done by the sculptor himself in the Vatican foundry, was defective. Disappointed by the lack of success and taking full responsibility for the event, Algardi was aided by his friend Cardinal Virgilio Spada. The latter on 28 October 1648 “indemnified” him with the amount of 200 scudi that allowed the sculptor to pay for another casting attempt.

The second casting satisfied the purchasers and, even though its surfaces were not perfectly finished and the casting marks not removed, given the urgency to place the statue on the Capitoline Hill for the Holy Year celebrations, the large bronze statue was transported and placed on a temporary pedestal in the great Hall of the Palazzo dei Conservatori where, on 9 March 1650, Innocent X went to view it.

← Bust of Hadrian
Statue of a Child Strangling a Goose →