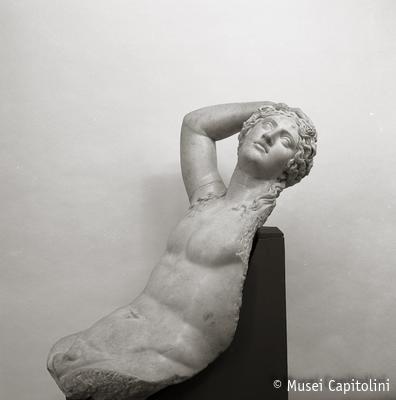 Dionysus is depicted as a young man, in the god’s typical effeminate stance and with a languid, dreamy expression. His raised right arm is bent so that his hand rests delicately on his head, which is slightly tilted upwards and to the left and crowned with ivy leaves and tufts of hair (corymbi) .

The eyelids are well defined and slightly lowered, the iris of the eyes is engraved with a deep-set pupil; the lips are parted so as to show the teeth .
His hair, neatly delineated on top of the head, falls forward in a parted wavy line that frames both sides of the face; at the nape, the hair is tied in a knot and then fall on the shoulders in curls. The locks are separated by deep furrows made with a drill.

The position of the hips indicates that the god was seated, with his right leg bent and his left one stretched, turned to the right and probably clad in a drapery.
The back surface of the body is chiseled and the upper part of the thighs is shaped symmetrically. The left arm is missing; therefore it is not possible to establish whether Dionysus was accompanied by Faun.

The way the pupils are engraved and the deeply carved hair clearly demonstrate that this work belongs to the Antonine period (138-180 AD) and that the artist drew inspiration from the repertoire of sculptural types of the classical period deriving from Praxiteles’ Apollo Lykeios.

The torso was found at Villa Palombara.