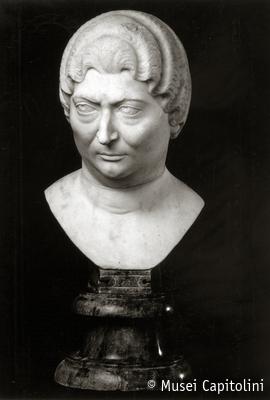 The portrait depicts a mature woman with the head turned to right; the face is characterized by flabby cheeks, hooked nose, and tight lips. The eyes have iris and pupil incised; wrinkles run to either side of the mouth. The advanced age is also suggested by double chin and fat throat.

The wavy, shell-like hair is tied back in a bun on the nape.

The coiffure, which resembles that of Julia Domna, the wife of the emperor Septimius Severus, dates the portrait to the Severan age.

Formerly in the collection of the cardinal Alessandro Albani, the portrait was acquired for the Capitoline Museum in 1733.