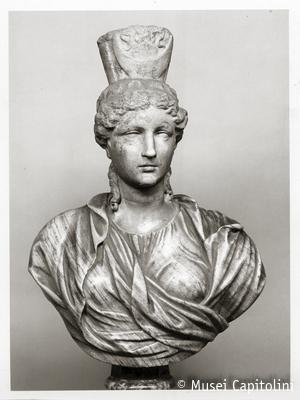 The head of Isis is set on a non pertinent, draped bust in alabaster; originally it was associated with a full-figure statue.

The goddess, the head slightly turned to left, wears a high, cylindrical modius adorned in front with the solar disk rising from crescent-like horns and flanked by two small cobras. The head is wreathed with a tenia; the hair, parted at centre, are tied back in a knot with two locks falling on the neck.

The head is a Roman copy, dating to the mid-2nd century AD, of an image of Isis created in the 4th century BC.

It was purchased for the Capitoline Museum from the collection of the cardinal Alessandro Albani in 1733.

← Male portrait
Statue of a female character identified as a Muse →