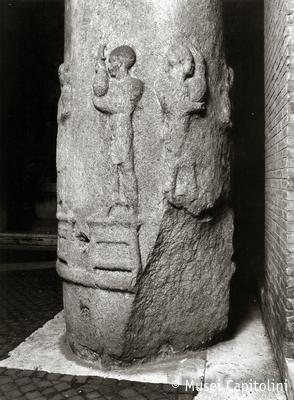 The Egyptian-type column, narrowing towards the bottom, is in granite from Elba; originally it was associated with a capital and a base in white marble worked separately. The frieze is carved around the shaft immediately above a listel.

Depicted are four pairs of priests or cult attendants facing each other and standing on high stools; their heads are shaved and wreathed with laurel leaves. All the figures wear Egyptian-style sandals; the canopic jar bearers are clad in long, high-necked tunics, while the other attendants have the upper part of their bodies uncovered.

Since the surface of the shaft is rather worn out, it is not always possible to identify the objects presented by the priests; the first pair is particularly defaced and the only readable detail is the papyrus plant held by the priest standing on the left; the objects carried by the second pair are equally difficult to read, the priest on the right is offering what seems to be a piece of fabric; the third pair, which is also the best preserved, depicts priests carrying canopic jars: the jar on the left is provided with the head of Isis, the jar on the right with the head of Osiris; both heads are surmounted by horned crowns, solar disk and two feathers. The fourth pair, which is only partly visible because of the position of the column, includes a priest with a canopic jar surmounted with the head of Osiris and another holding a long-beaked vase that several scholars have identified with a cult vase described by Apuleius.

Particularly popular in Egypt throughout the Pharaonic period, columns characterized by shafts decorated by figured reliefs were still in use in the Ptolemaic and Roman times especially in association with sanctuaries dedicated to Egyptian deities. This type of column is also well attested in Greek architecture of the Asia Minor; a famous sample is represented by the Temple of Artemis in Ephesus dating to the archaic period.

The Capitoline columns are in fact interesting samples of Roman artefacts imitating Egyptian models under several aspects, including style and iconography. The rigid profile view of the priests is typically Egyptian; the priests’s long robes, which in the Roman period were still made of white linen as at the time of the pharaohs, and their shaved heads are also traditionally Egyptian and find parallels in the paintings of Herculaneum, and Pompeii. On the other hand, typically Roman features include the laurel wreaths and the stools; also the scheme of the priests facing each other does not find any counterpart on Egyptian columns, which usually show the encounter of the Pharaoh with deities; on the Capitoline columns the priests themselves are responsible for the offering.
Along with a Hadrianic relief with an Isiac procession in the Vatican, the fresco of the Iseum in Santa Sabina and the frescoes of the Temple of Isis in Pompeii, the Capitoline columns testify to the survival of the Egyptian cult in Roman times.