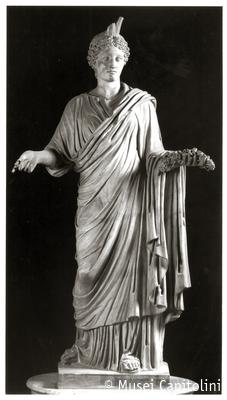 This sculpture represents a standing Muse, clad in a chiton with short sleeves and a cloak that passes over her left shoulder and under her right arm; she wears sandals on her feet, while three feathers adorn her head.

The work resembles another statue in the Vatican Museums that has been restored as Urania and that might be a copy after an original, perhaps representing a Kore, by the sculptor Praxiteles. The drapery in particular is modelled in a stylistic manner close to that of the school of Praxiteles, even though the features of the head allow us to state that it depicts a Muse.

The statue, dating back to the second century AD, was found in Vigna Lisca, an area opposite to Santa Sabina on the Aventine, where probably it adorned the Baths of Decius.

In the 16th century, Ulisse Aldrovandi reported it in the house of Francesco Lisca in Parione and described it as a statue of Juno Lucina, with three feathers on her head and holding a bouquet of roses in her left hand.

It is not known exactly when it was purchased by the Conservatori, but as early as 1687 it is documented on display under the name of Flora in the Museum’s Hall of the Philosophers.